I hope you find this fish info helpful on Charter Fishing on the Gulf Of Mexico out of Madeira Beach Florida.   Please call me if there are any other questions I can discuss with you.

When young, has conspicuous alternating black and white horizontal stripes

Cobia are found in nearshore and inshore waters with inlets and bays. Cobia are frequently found around buoys, pilings and wrecks in these areas..

is the smallest tuna species in the Thunnus genus, generally growing to a maximum of 100 cm (39 in) in length and weighing 21 kg (46 lbs).

is a species of tuna found in pelagic waters of tropical and subtropical oceans worldwide.

Yellowfin is often marketed as ahi, from the Hawaiian ʻahi, a name also used there for the closely related bigeye tuna.[2] The species name, albacares (“white meat”) can also lead to confusion: in English, the albacore tuna (Thunnus alalunga) is a different species, while yellowfin is officially designated albacore in French and referred to as albacora by Portuguese fishermen

is a surface-dwelling ray-finned fish found in off-shore temperate, tropical and subtropical waters worldwide. Also widely called dorado and dolphin, it is one of two members of the Coryphaenidae family, the other being the pompano dolphinfish. 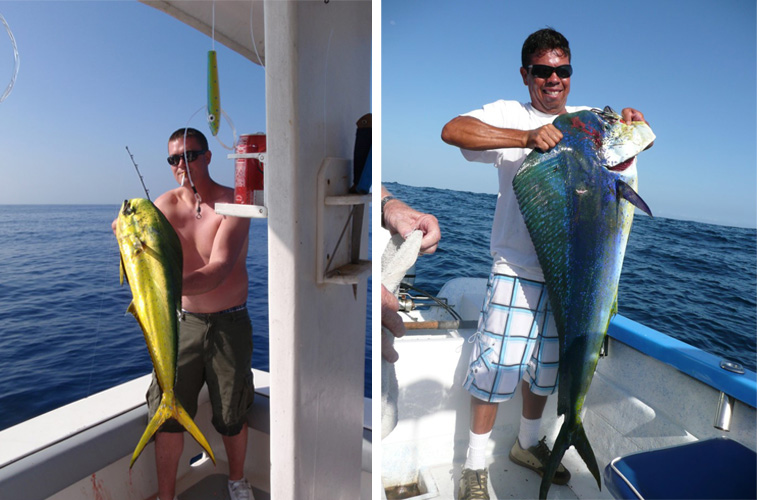 is a scombrid fish found worldwide in tropical and subtropical seas. It is best known to sports fishermen, as its speed and high-quality flesh make it a prize game fish. In Hawaii, the wahoo is known as ono.[4] Many Hispanic areas of the Caribbean and Central America refer to this fish as peto.

The flesh of the wahoo is white to grey, delicate to dense, and highly regarded by many gourmets. The taste is similar to mackerel, though arguably less pronounced. This has created some demand for the wahoo as a premium-priced commercial food fish. In many areas of its range, such as Hawaii, Bermuda and many parts of the Caribbean, local demand for wahoo is met by artisanal commercial fishermen, who take them primarily by trolling, as well as by recreational sports fishermen who sell their catch

Red drum, also called redfish, channel bass, spottail, red bass or reds, are one of Florida’s most popular sport fish and the state’s most widespread estuarine fish. Red drum are named after the “drumming” sound the make during spawning and when taken out of the water. The sound is produced by muscles rubbing against the inflated air bladder. Red drum inhabit the nearshore and offshore waters throughout the Gulf of Mexico and along the Atlantic coast from Massachusetts to Key West. Red drum in Florida can reach lengths of 45 inches and weigh up to 51 pounds. The world record red drum was caught off North Carolina waters in 1984 and it weighed 94 pounds, 2 ounces.The oldest recorded red drum in Florida was aged at 40 years. Floating a live shrimp under a popping cork is a good way to fish for red drum.

Tarpon have a distinctive dorsal fin ray that extends into a long filament, a large upward pointing mouth and very large scales

Tarpon can gulp air and remove oxygen by means of lung-like tissue near their swim bladder. This “rolling” effect is one way to spot tarpon. Anglers catch tarpon that weigh 40 to 150 pounds on average. Tarpon do not mature until 7 to 13 years of age. They spawn offshore between May and September.

Snook are found from central Florida south, usually inshore in coastal and brackish waters.  They are also common along mangrove shorelines, seawalls, and bridges.  Snook are also on reefs and around pilings nearshore.

They congregate in large schools during summer in deep passes and inlets to spawn. Snook begin life as males, but between 18 and 22 inches long some become females.  Spawning occurs primarily in summer.  Snook school along shore and in passes during spawning season.  They feed on fish and large crustaceans.

All other questions can be answered by calling me or sending me an e-mail call2fish@confusioncharters.com